I joke with my wife that “they grow up so fast” – but in this case, it’s *ME* who is astounded at the years passing by so quickly.

Our little baby boy Charlie has just turned THREE – and don’t we know it !

Here’s the blog from age ONE, and TWO.

He’s become an amazing young lad – with the most incredible infectious belly laugh.   He really does have a great sense of humour.    (I have to be careful not to tickle him TOO much – he laughs, and laughs, and then cough-gag-spew – oops !)

Charlie is usually in the shadow of his big brothers, and plays along with most of their games.   His favourite (lately) is NINJAGO – and he’s constantly spinning the figurines and/or himself – and bouncing around on the trampoline…

He’s still a daredevil – and climbs up & down play equipment like a little monkey – I swear he thinks he’s twice the age.   Again, trying to keep up with his brothers.

In Charlie’s early years, he had some health problems (mainly with allergies) – and we’ve got a fairly controlled (and easy) diet for him now – still avoiding nuts, eggs & dairy.   That means soy milk at breakfast, and cheeseless pizza (if we’re getting take-away) – and then soy yoghurt for dessert – or fruit, etc.   It’s become “the norm” – and not a problem at all.

** In some of the photos below, you can see the rash & cuts on his chin, he used to have sores – and would scratch till they bled – poor fella.   Thankfully, that’s all cleared up now-a-days…

Charlie started some activities of his own too – with two terms of swimming with Dad (me) – and now into lesson in the pool on his own.  He just loves swimming, and laughs his head off – to the point that he needs some ‘discipline’ to concentrate…    (LOL !)

He’s also been doing “Ed Gym” which he does with his Mum.  I haven’t seen the sessions, but it’s essentially a gymnastics & activity session to music – again, climbing, balance beams and similar ‘monkey’ activities – suffice to say, he loves it.

He wanted to do AusKick too.  When they were handing out the jumpers on registration day (Cameron, 7 and Liam, 4), Charlie was crying and upset at missing out.   They gave him a loan jumper also – which goes past his knees – like a footy dress – but he feels like he’s joining in with his brothers…

I’m pretty sure that Charlie is going to be a gamer like his brothers – his choice these days is FRUIT NINJA (XBox/Kinect) – but he’s been ‘helping’ to play Mario Brothers – well, holding the spare controller at least…

He’s a little bit beyond for his years – Donna says “he’s been here before”.   He just takes it all in his stride – the TV shows and games he sees would NOT have been allowed for his older brothers at the same age.

Bedtime is one of my favourite times, when I cross my legs on the floors, and he plops down on my lap, and I read stories for all three boys (as they share a bedroom at the moment).

He’s enthralled by books – and often takes a book to bed – just to hug and usually sleep on top of…!

When it comes times for bed, Charlie’s favourite toy is a stuffed penguin that we got at the Melbourne Aquarium – which has been named PICKLE – I think he had troubles saying ‘penguin’ – and it’s ended up that way !

His vocabulary is growing daily, and his comprehension is amazing – he’s into the “do it myself !” phase – and can get fairly stubborn too (!) – the next year will be challenging, methinks…

Dear Charlie – thanks so much for making our lives a joy, with your cheeky smile, infectious laugh, incredible wit and charm, and adventurous & curious nature – and your ‘wiser than your age’ mannerisms (he’s definitely been here before !).

We love you buddy – and your big heart that fits right into our family. 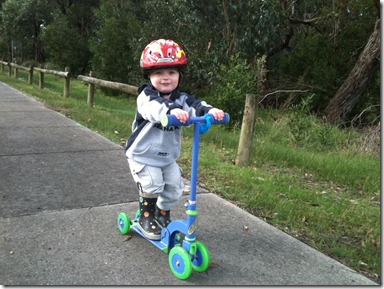 Did I mention cheeky ? 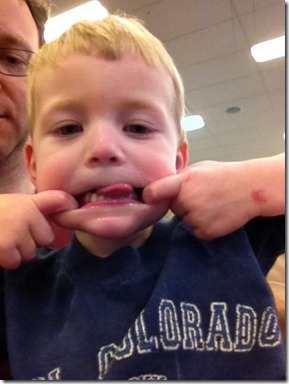 Charlie with his brothers. 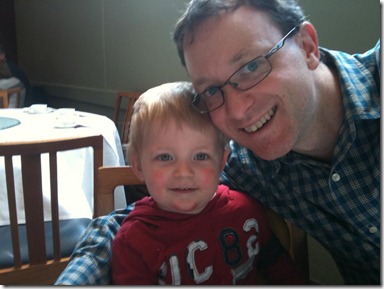 At the zoo (with Mum)

With GrandDad (my Dad)

The view is great from up here !   (The Basin Music Festival)

Too cool for school… 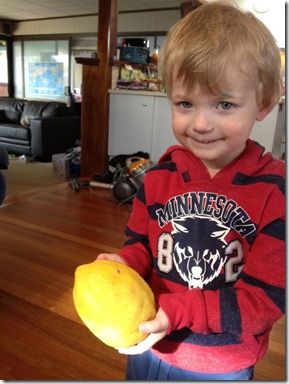 7 thoughts on “Charlie has turned THREE !”