Wow – the years are just flying by – and our ‘oldest’ lad has just turned 7.

This last year has brought a multitude of changes for him – with starting school the most significant and life-changing for him.

As I’ve done in previous years, I like to write up a post about the previous year, and whatever has shaped them – and some funny stories & such.

Sooooo much has happened this last year, that it’s hard to remember, and identify all of the highlights. 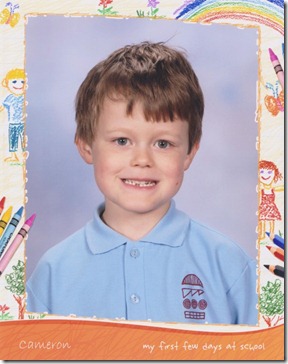 Last year, Cameron was in prep at Knox Gardens in Mrs.Roussos’s class.  He has grown tremendously in confidence and personality – with many MANY friends, and lots of play-days and birthday invitations.

He loves doing the show-and-tell, and his report card/interviews have been glowing – that he’s a very sensible little boy, and aware of other classmates – very considerate and empathetic.  We couldn’t be prouder.

During the school year, he’s had his weekly lunch orders as “very exciting” – and has enjoyed having a grade-6 “big buddy” – with his friend Nathan.  I don’t know who benefits more from the relationship – Nathan seems to think Cameron is pretty cool too !

He had a great time at the school concert – and dress-up days (crazy-hair day) – and absolutely kicked butt at the school sports day !    He won the 100m run in blazing time – even stopping to look over his shoulder – ha ha !   And then, his team won the two relay sports – and then he screamed home in the 200m run too !   He was the only PREP kid with FOUR first places – super proud Dad !    (LOL !) 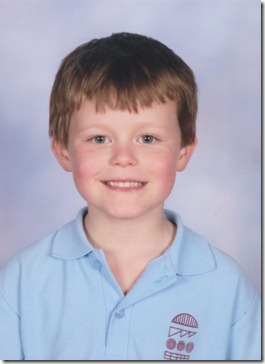 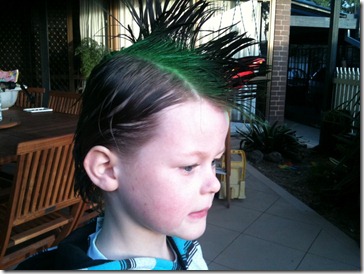 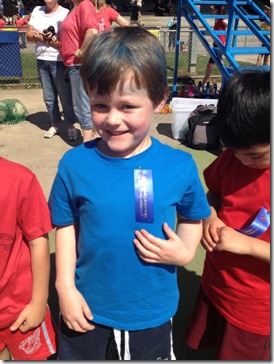 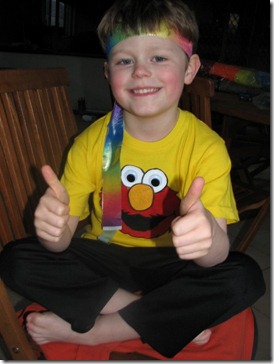 With Cameron growing up more, he’s been enjoying playing more active sports – and has really been enjoying AusKick.  This is a way for young kids to get started with AFL – and learn some ball skills, and have fun on a cold Saturday morning.  We had some awesome crisp cool blue-sky days – and I was really enjoying it myself.

Cameron and I would ride our bikes there – nice fun outing for father and son.

And then – I couldn’t have been more pleased as the day he won the GOLDEN BOOT !

This was a take-home award, and had to bring it back to the group the following week.  Cameron was lucky that it was grand-parents day – so there was a bunch of over 60-70 adults, and the same number of kids – as they read his name out – and he was presented with the award – and he held it over his head as everyone cheered.

I swear I must have gotten some dust or dirt in my eye – or something like that.

The lads from AusKick got to play the ‘half-time’ game when the Knox Falcons played – which was a lot of fun for them – and they then lined up on the corridor and high-fived “the big men” players as they ran on to play the second half.

Cameron and I also had a trip to see RICHMOND play – against an in-form GEELONG team.  We expected to lose – and we got thrashed !

When we (finally) scored a goal, he was so excited that he jumped up, and the seat he was on “folded-up” and so he sat down to NO seat – and fell on the concrete.  A few people around LOL’ed and he was a bit embarrassed – but no biggie. 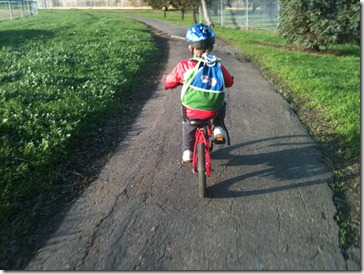 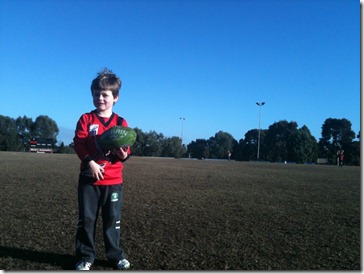 Cameron with the GOLDEN BOOT : 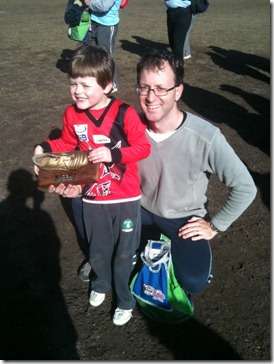 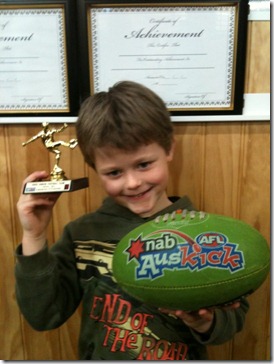 On the way to see Richmond v Geelong : 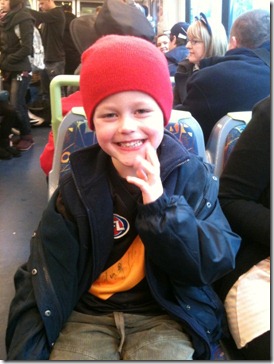 Our team got thrashed, but it was actually kinda funny (!) 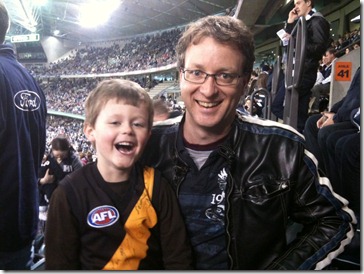 If he could have free-rein to do ANYTHING – he’d play his Nintendo Wii – he got a Mario Brothers game from Santa – and plays it for hours – and HOURS !

He also likes to play Lego-Star-Wars and Donkey-Kong-Country-Returns – oh, and Mario-Kart.  I’m amazed at how good he’s gotten – I remember showing him Crash Bandicoot on the XBox a year or so ago – and he struggled to simply jump over the hole.

He also loves playing on Dad or Mum’s iPhone – we’re glad he hasn’t got a Nintendo DS (yet ?) – as we’d never get his head outta the screen…

He uses our laptop to play a few games – and some educational ones – especially MATHLETICS – which he really enjoys, and is quite good at.

Movies – he’s discovered POWER RANGERS somehow – and has been grabbing DVD’s from the local BlockBuster store.  He also (still) loves BEN-10 – and has other films such as YOGI BEAR and THE SMURFS – and a new birthday DVD of NINJAGO.

We also watched the first three Star Wars movies – with 1/2 of the movie each time – and some pausing to chat & have a break.  He was excited to hear what a REAL light-saber would sound like (when Ben Kenobi first hands his light-saber to Luke)

Cameron thought Chewbacca was pretty cool (he he) – and even pointed out IG-88 and BOSSK and BOBA FETT – the bounty hunters scene from Empire-Strikes-Back.

Wow !   (he learnt a lot from playing the Nintendo Wii game !)

Cameron was pretty surprised to hear about Luke’s Dad – he was a little stunned – and then when he found out about Luke’s sister – he was even more amazed !

I’m so pleased to have been able to watch the films WITH him – rather than have him talk with friends at school – and learn ‘the truth’ about the Skywalker’s.

LEGO – he’s still gun-ho mad for Lego – and has made some amazing new creations lately.  We’ve taken a photo of one – and sent to the Lego Club – they might print his picture – that would be amazing ! 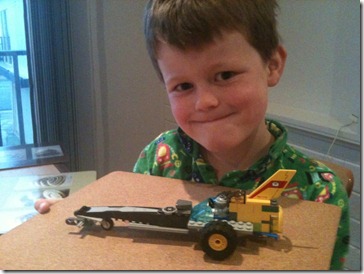 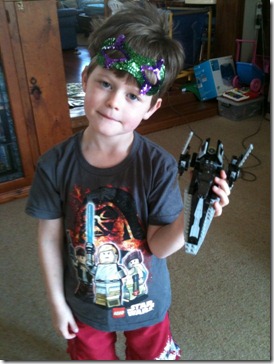 Cameron is great big brother to Liam and Charlie – becoming closer buddies with Charlie a lot – but plays Wii with Liam for hours on end.  I think Cameron forgets how big & strong he’s getting and can sometime be a little rough.

He’s also got boundless energy – and never seems to stop…

Family bushwalk to The Dandenongs : 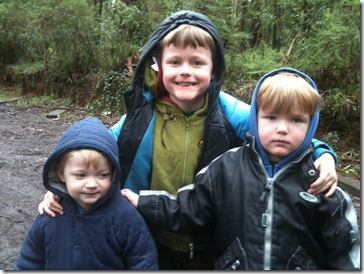 The Giant’s Chair – at Sky High (The Dandenongs) : 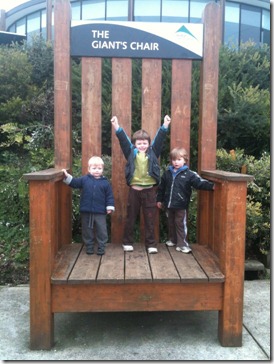 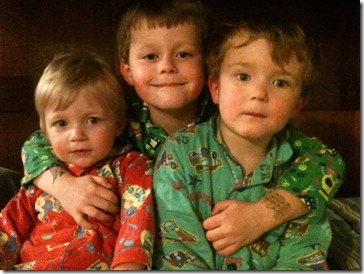 I just noticed that the kids line-up in the SAME pose for all of those pictures – left-to-right – is always Charlie, Cameron and Liam – LOL !

His cousins Millie & Jasmine are great friends, and we have a few kid-swap-sleep-overs – they get along to well together.  Millie & Jasmine have a pool at their house – Cameron loved splashing in/out for hours… 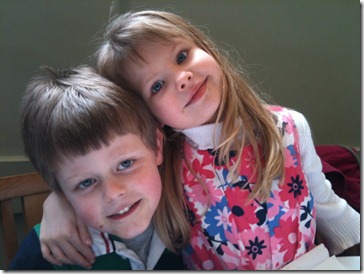 My sister (his Auntie) lives in Castlemaine, and so Cameron and I had an adventure one weekend, and went on the V’Line train to visit her – and stay overnight.  This was a great experience for all of us – with Cameron and Kath going on a steam train, and being able to pick his brekky egg straight from the hen house – he loved our trip away.

He was kinda sad though, when his beloved AusKick football was chewed up by Kath’s dog Jem – and he disappeared into the bedroom and we found him crying into his hands – aaww.   “It was my first ever football”…

But – Christmas time – Jem gave Cameron a NEW football, and he made sure NOT to leave it outside overnight… 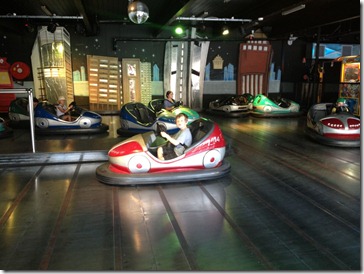 Random pics from the last 12 months :

Mathletics on the home laptop : 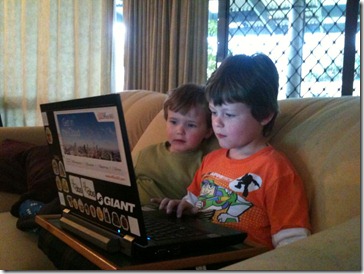 Having a chocolate milkshake at the shops : 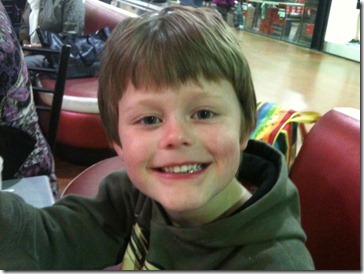 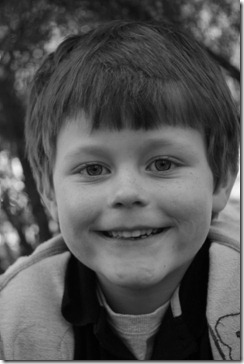 Silly props – from the shed at Auntie Kath’s : 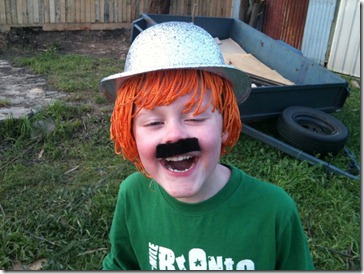 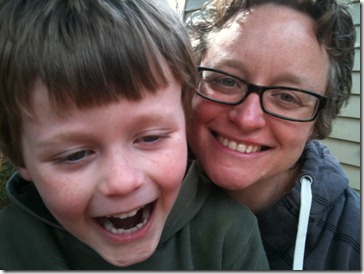 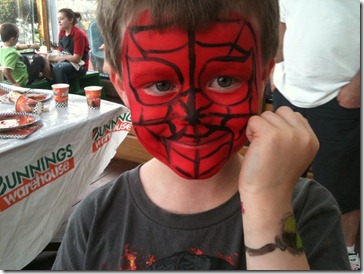 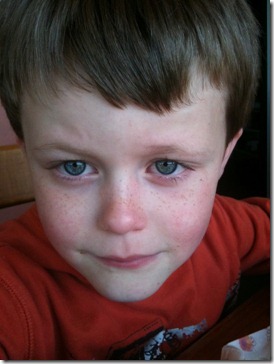 Dress up as a pirate for a birthday party : 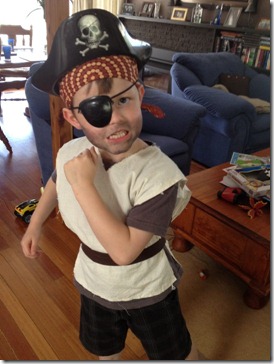 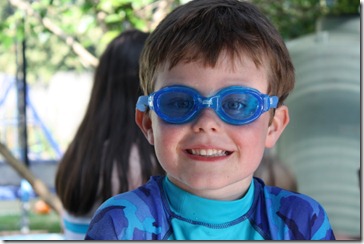 Thanks Cameron for an incredible year – with lots of changes and new experiences – and a few trials along the way – yep, the personality ‘evolution’ can be challenging at times…(!)

You’ve become an awesome young boy – and we can’t wait to see what the years ahead will bring.

6 thoughts on “Cameron has turned SEVEN !”