Yep – another birthday in our busy household – our “little Liam” is now FOUR !

With each of our lads, I like to write a blog post for their birthday – as a kind of time machine – will be great to look back in years ahead.

Here’s the posts from his 1st and 2nd and 3rd birthdays.

Liam has become a real-little-boy now – with “his” world growing all the time.

He’s now at three-year-old Kinder – and this has broadened his horizons – and he now has a great bunch of friends of his own.   He actually wakes up and says “Is it a Kinder day today ?” – so I guess he loves it…! 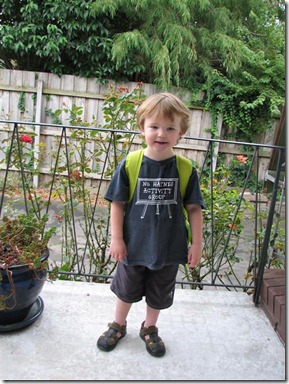 His best friends at Kinder are Alex and Daniel – and he’s popular with the girls too – Hannah and Kiera.   Some of the girls can be kinda mean at times though – and Liam is a little sensitive to that (hurts his feelings).

Some great activities, games and playtime – it’s greatly improving his confidence, and not just living in the shadow of his big brother Cameron.

He also has been off for lots of play-dates too – with Alex – and his Mum Alison.

Each of our lads do a special activity – and Liam has swimming as his weekly outing.

It’s some nice Dad+Liam time too – only the two of us have been going for a while now – I watch him from the sidelines.

He can do treading-water for nearly 30 seconds now – and loves to jump in from the deep end.

Liam is now into a “big boy bed” – on the bottom bunk, sharing with his brothers.  We have all three of the lads in the same room together – with Cameron on top, Liam underneath – and Charlie in a bed to the side.

He still has a dummy in bed at night – but Santa has emailed us to say that he’ll be taking his dummies this year, and he’s (so far) OK with the idea.   He takes a bunch of ‘covers’ to bed with him – and we can often hear them clunking around as he looks/plays with them.

He likes to take a book to bed also – but he never gets past page 2 – I often find him snoring with the book over his face/chest.   He’s a DEEP sleeper – always first to sleep, and would sleep through an earthquake I’m sure !

Liam is still wearing his boots in bed – we’d originally been told that would be until he was FOUR – and we considered having a big party to celebrate.  Doctors are now considering/recommending until age FIVE.

We’ll still have a big party when he’s DONE with them.

Like any little boy, imagination play is a constant with Liam !   He and his brothers are often zooming around as either BEN-10, or OCTONAUTS – acting out characters from their favourite TV shows.

The other recent one has been POKEMON – he runs around saying ‘Pikachu’ in a high-pitched squeaky voice.

He’s also been acting as DONKEY KONG – based on a Nintendo Wii game. He runs around saying “ooooh-hooo” – and beating his chest – LOL !

Of course, they play the real Nintendo game as often as they can – although he has to sit patiently while Cameron has his turn (Liam waits… and waits… !)

They also do FRUIT NINJA on the XBox 360+Kinect – Liam has the highest score for one of them…    And they do BOWLING on the Wii.

TV – Liam’s fave’s are Ben-10 (of course) – and Dora – and the movie favourites are Yogi-Bear, and Scooby-Doo – but his BIG favourite is THE INCREDIBLES…(!)

Somehow, we found a MR.INCREDIBLE figurine – and loved it so much that we tracked down the movie – it’s a few years old now.   Liam knows it back-to-front

He had a dress-up theme for his birthday – and wore a Mr.Incredible suit… 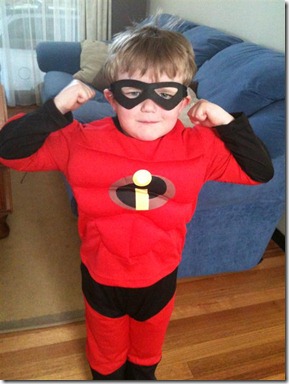 We try not to refer to Liam as being a “middle child”, but it’s a fact.  He has great fun having a younger brother AND an older brother – but sometimes gets caught in the middle.

Charlie is now starting to have more dialog & comprehension – and Liam often talks to him, and asks him things, but in a funny-high-pitched voice :  “Chawee, do you want some dreenk, chawee ?!?”

The three of them are ‘thick-as-thieves’ – often playing together on the trampoline, acting out Mario Brothers, or Ben-10.

Liam also looks to the activities that Cameron is doing, and I’m sure he’ll do great once he gets to school.  Once Cameron is done with his ‘reader’ for the night, Liam wants to have a go as well.

On the subject of bouncing on the trampoline with his brothers, there was an “incident’” a few months ago, when Liam & Cameron were jumping on the bed.

Donna heard a crash and a wail from the bedroom – and ran to see what happened.

BUT – she was unable to open the bedroom door – something was blocking the door.   So – she had to go outside, and up the side of the house, and look in through the window.

Liam had fallen between the bed and the wall – horizontal/sideways – and was now WEDGED in place, with his head+body stuck – and his legs sideways, blocking the door from opening – LOL !

Cameron was hysterical – and Liam was crying – and Donna was locked out !

She had to get Cameron to unwind the window, and then she was able to un-screw the window-winder, and then climb into the bedroom – and could get Liam out.

Unfortunately, I was at work to see the drama unfold, so I got the story when I arrived home from work.   No-one had been hurt – but I had to stifle a laugh as Liam & Cameron were telling me how Liam was “stuck along the wall + bed”.

We have a great home life, Liam is a big part of the noise & action – often it’s tears or crying over the wrong coloured bowl – or just wanting to ask something.

He’s also great fun with his cousins – he & Jasmine have a special bond, and are never more than a metre apart when playing.

I mentioned his “crying” – not forgetting that he’s still “only” just turned four – but he has a real knack of turning on the waterworks.

He cries at anything that goes slightly wrong, or if Charlie takes a toy from him.   Or – if we growl at him when he’s not eating dinner (for example).

But – we’ve learnt to ignore it for the most part – he can turn and laugh less than 10 seconds later.   So, the tears ‘don’t work’ on us – but he still tries…

Another part of growing up is drawing & writing – he can do some very cool people & faces now – and is REALLY good at writing his own name.

And – he scoots along fairly quickly on his “balance bike” – which is a pedal-less bike.  When going on the school pick-up walk, he can sit on the the bike, and just scoot along.

We’ve also got him a scooter as well – he’s just now starting to get the skills for that – with standing up – and scooting himself along (like his big brother Cameron).

One of our favourite ‘walks’ is to take the dog, and all three lads (on bikes), down to “Muddy Creek”.

And – in other grown-up news – Liam is now toilet trained !

He had gotten the ‘knack’ of the #1’s for aaages, but it was the 2nd part he couldn’t sort out.   But – like a switch was flicked overnight, he GOT it…!

The funny bit is that we made such a big deal out it, and how proud we were – that he was telling everyone !   Including shop-keepers, people in the street, and even his Nanna’s house-maid.    “Hi, I’m Liam.  And did you know ?   I can do wee’s and poo’s on the toilet…”

So many things about Liam just make us smile – he’s a great personality.

He has a few other favourites that are worth noting : 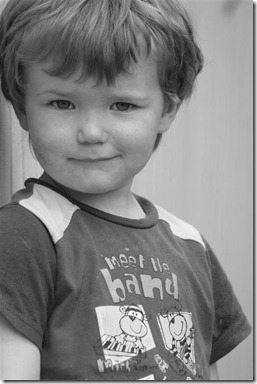 Liam, you’re an amazing young boy who is growing up so fast – you bring us such joy & laughter (and a few frustrations along the way !)

Hope you had a great birthday (with the Donkey Kong birthday cake) – love you lots, little mate !

5 thoughts on “Liam has gone fourth !”